Fall in Love with a Benjamin Franklin Era Cranberry Pie 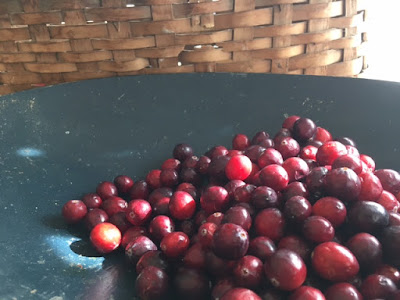 We're used to cranberries commonly filling a tasty, tart relishing niche at holiday tables.  For Benjamin Franklin and his London friends the classic American berry, largely unknown in England, brought a bit of Colonial tartness to the dessert tray. This easily made pie will delight your guests as well.

Benjamin Franklin would spend nearly two decades in London in the years before the American Revolution. While there he rented rooms from widow Mrs. Margaret Stevenson and her daughter Polly. They became a surrogate family and grew close to Benjamin's wife Deborah and daughter Sally back home in Philadelphia. Goods were shipped back and forth across the Atlantic. Fine fabrics, clothing, and household goods from London for the Franklin women and special homemade treats for Benjamin and the Stevensons.  Deborah sent smoked venison, Philadelphia biscuits, barrels of apples and cranberries which were enjoyed by all. The Stevenson English kitchen had never seen cranberries and was quite taken by the tart richness of this native American fruit.


As agent for Pennsylvania Franklin lobbied for colonial interests.  He also met with scientists and philosophers with whom he had corresponded for years. His company was widely sought and he spent many an evening in social and scientific clubs.

Make the Cranberry Filling:
Wash and pick over cranberries. Combine them with brown sugar, lemon juice, and water in a 2-quart saucepan. Cook over medium hear, stirring constantly, until the berries burst, about 5 to 10 minutes. Stir in cinnamon and cloves. Set aside to cool.

Put the flour into a medium mixing bowl. Cut the butter into small bits and then use a pastry cutter or two knives in a "crisscross" action to cut the butter into the flour so that the mixture looks like dry oatmeal. Sprinkle 4 tablespoons of the water over the mixture and stir with a fork to combine into a ball of dough that just sticks together. If the mixture is too dry add additional cold water a little at a time.

To make the Cranberry Tarts:
Preheat the oven to 425 degrees F.

Roll the dough out on a well-floured surface to 1/8-inch thick. Cut into circles large enough to fit into and up the sides of your muffin tins. For my standard tin with cups about 2 1/2-inches across I cut circles 4 inches in diameter. Spoon the cooled cranberry filling into the pastry-lined cups. Leave room at the top for the filing to bubble up as it cooks. Bake until the crust is browned, about 20 minutes.

Franklin image from the US Capitol painted by Capitol artist Constantino Brumidi.


For many of us the holiday season brings special opportunities to share. Toy collections, red kettles, church and community outreaches of all kinds are welcome signs of the season.

Throughout his life Benjamin Franklin combined social activities with social activism. Although he composed "drinking" songs which he shared at his Junto philosophical club and the members enjoyed each other's company, the principle purpose of the group was to do good. The name of the group may have come from the Latin "juncta juvant" which translates "joined together, they assist." From those associations which began when he was in his early 20s and lasted throughout his life, Franklin and his peers did accomplish much for the good of the city and the nation to come. They founded the Philadelphia's first fire company. The members were to keep buckets at hand ready to put out fires in their center city neighborhood. He developed a fire insurance company as well. Under the group's auspices Franklin started the nation's first subscription library. And with fellow member John Bartram, American's leading botanist,  Franklin started the American Philosophical Society.  Both the Library and Philosophical Societies still support intellectual investigations today.


Franklin sought colonial unity as early as 1756 when he joined other colonial leaders in Albany, New York. There he presented his plan for mutual military support. He proceeded his appeal publishing what is considered to be the first American political cartoon in his Pennsylvania Gazette, urging the colonies to join forces of risk death of self-rule. The delegates often met over a tasty cup of Arrack Punch--recipe below.

The Philadelphians who were members of Benjamin Franklin's intellectual club, the Junto, met on Friday evenings when it would have been customary to enjoy some sort of light supper. These seeded treats, a cross between a cookie and an English biscuit, might have made an appearance as well. Aniseed tastes a bit like licorice. The seeds can be quite pungent and therefore these treats taste best when they have mellowed for a day two in a sealed container.

Preheat the oven to 350 degrees F. Lightly grease a baking sheet(s) or line with parchment paper.

In a mixing bowl, combine the flour, sugar, and baking soda. Use a pastry cutter or two knives in a "crisscross" action to cut the butter into the flour mixture so that it looks like dry oatmeal. Stir in the aniseed and then the egg yolks. Gradually stir in the water until you have a firm dough that you can knead easily without crumbling. Break off balls of dough, about the size of golf balls; you should have about 18 balls. Roll them under your palms into 7-inch-long "pencils" and then form these into loose knots or coils. Place on the prepared baking sheet. Bake until light brown and firm to the touch, about 25 to 30 minutes. These keep for days in a sealed container.

This light and refreshing punch was described in 1771. Pehr Osbeck, Olof, Toren, and Carl Gustave Ekeberg wrote in A Voyage to China and the East Indies "The punch which is made for the men in our ship, was heated with red hot iron balls which were thrown into it."  Without the alcohol, this is a a very nice and light lemonade. With the Arrack van Oosten, the punch packs a bit of a kick.

One day before you want to serve the punch combine the water and sugar in a medium saucepan and stir over low heat until the sugar is dissolved. Wash the lemons and slice into 1/8-inch-thick rounds, or thinner. Add the lemon slices to the sugar syrup and allow to steep overnight in a cool place.

When ready to serve: add the Arrack. Serve in punch cups to a dozen friends. If you wish to serve this warm, gently heat the base, remove from heat and add the Arrack.

Adapted from "Arrack Punch," Pehr Osbeck, Olof, Toren, and Carl Gustave Ekeberg, A Voyage to China and the East Indies, 1771.

Benjamin Franklin statue carved by Hiram Powers was installed in the Senate wing of the US Capitol in 1862
Copyright 2017 Rae Katherine Eighmey. All rights reserved.